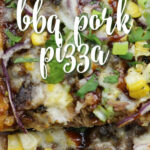 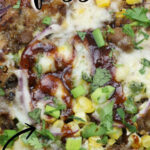 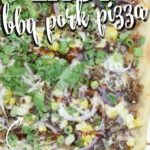 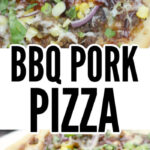 With a few homemade ingredients and the help of some ready-made foods, you can have a tasty, original pizza on the table in about 30 minutes, like this BBQ Pork Pizza or my Fig Jam, Caramelized Onion, and Prosciutto Pizza.

I like to purchase ready-made dough at my local grocery store and then pile on the toppings.

Sometimes pizza can be as simple as a traditional Margherita style pizza, with fresh tomatoes, basil, and mozzarella, but other days I like to change things a bit, like with this BBQ Pork Pizza.

Using leftovers as pizza toppings is a great way to get dinner on the table fast. I cooked some Smithfield Pork Spareribs for dinner on Sunday, and then chopped up the leftovers to use later in the week.

How to make BBQ pork pizza

BBQ Pork Pizza: Dinner with meat and vegetables in 30 minutes or less! 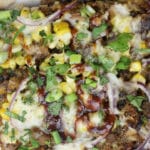 This is a sponsored post written by me on behalf of Smithfield Marinated Fresh Pork. All opinions are my own.

Update Notes: This post for BBQ Pork Pizza was originally published March 28, 2017, and on April 13, 2020, was updated with one or more of the following: step-by-step photos, video, updated recipe, new tips.