Edited July 2018: In the six years since this post was first written, 545 Americans have been killed in the War on Terror, 15 just last year in 2017 and 2 so far in 2018. My son fulfilled his commitment to the Marines and is no longer in the service.

But many of our young men and women are still serving in Afghanistan, with more expected to be deployed later this year. Whether you agree with that or not, those young people are doing their job, a job which they in good faith signed up to do—something less than 1% of Americans are willing to do. Let's take a moment to honor them and remember that this day is supposed to be about more than fireworks and apple pie. 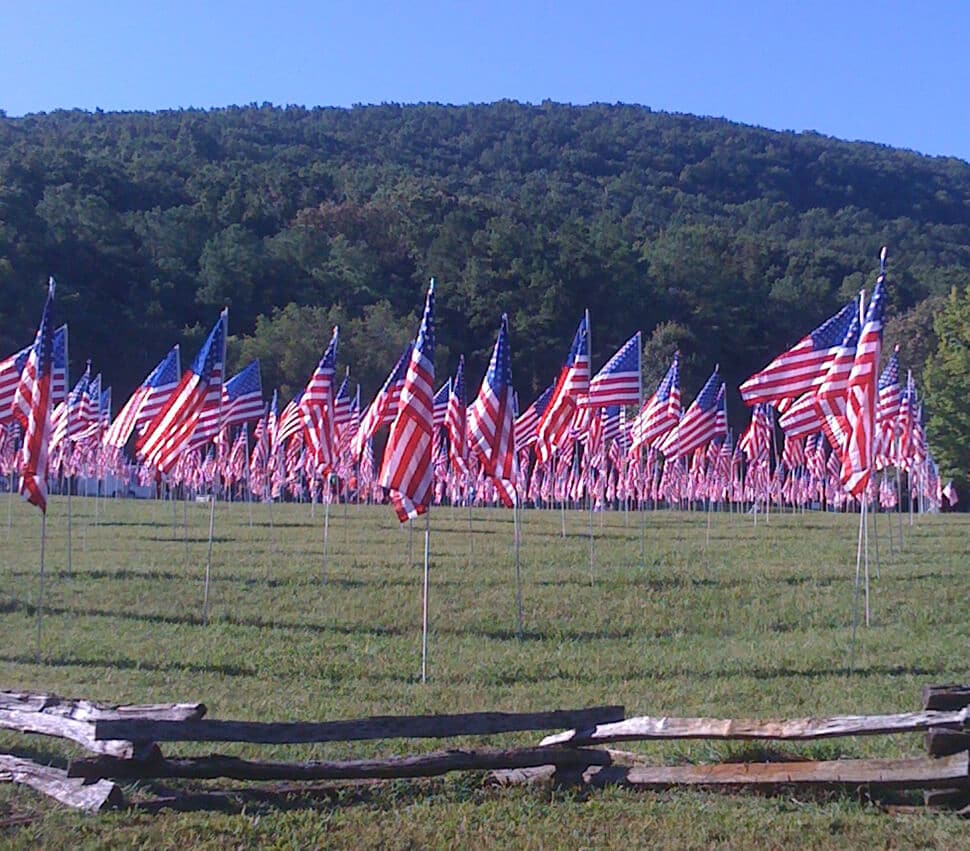 Today is Independence Day, a historic day with deep meaning for our nation. As you read this, I will be running (walking) in the Peachtree Road Race with approximately 65,000 other people in downtown Atlanta.

Later today, like many of you, I will be celebrating this Independence Day with friends by drinking beer, eating watermelon and watching fireworks.

The Soldier above all others prays for peace, for it is the Soldier who must suffer and bear the deepest wounds and scars of war.

And, like many of you, I will not have much time to reflect on the meaning of the day beyond the lip service that we give through our fireworks and red, white, and blue decorations. We celebrate in honor of our freedom, but we do so with little thought as to what that means. Most of us are just enjoying a day off from work and time with friends and family.

But this day is about more than that.

More than twenty-five thousand Americans gave their lives during the Revolutionary War to gain our nation’s independence from Great Britain. And since then, young Americans have been volunteering to secure that independence and freedom, often at the greatest personal sacrifice.

My baby boy, who is all grown up now and does not appreciate me referring to him as my baby boy, is one of those volunteers. He graduated from high school the end of May and three weeks later he was gone. He is currently learning how to be a Marine at boot camp at Parris Island.

That in and of itself makes me view this day a little differently—a little more personally—and with a greater sense of responsibility.

I want to share some parts of that letter with you. I have removed some personal commentary and any identifying information:

The 17 of June I stepped off a C-17 and arrived at Bagram Air Field, Afghanistan. My one year assignment in this far away land started that day…

Billeting here is tolerable. I share a two man small plywood building that has no running water. My side of the room has a single bed with a steel frame and a foam pad made in Kabul. No sheets and there are none in our little PX.

The broken wooden wall locker is missing the bottom out of one of the two drawers. It is stabilized by being nailed to the plywood wall.

My desk is a fine example of plywood carpentry, complete with two plastic drawers. Once the PX receives a new shipment of folding chairs, I will be able to buy one. There is a two panel fluorescent overhead light that runs down the center of the room.

I am blessed with an air conditioner that cannot be turned down to below 72 degrees. The bathroom is 132 steps outside in a steel framed building. The showers are in a separate building a little further away. It will be a challenge during the winter months to use those facilities with snow up to my ass.

I am getting in a bit of exercise going to the mess hall which is about ¼ mile away from my room. The food is good but remember, I will eat just about anything. My office is about ¼ mile in the opposite direction.

We are at an elevation of 5000 feet and surrounded by mountains that make up the foothills of the Himalayans. Those mountains completely surround us and are between 8,000 to 15,000+ feet in  elevation. Snow still on the tops of some of those mountains.

The "bowl" we live in is incredibly dusty and dirty. I missed the two week "rainy" season. So far, the daily temperature ranges between 100 to 110. We can expect them to reach over 120 later on.

All in all, life is good.

…It is a sad state of affairs when American or our coalition partners serviceman/woman are KIA and no one back home except for that person's family really cares. It certainly will not be on the national news programs. More are killed here than you think.

This is an election year and the stories of war and its horrible effects do not influence voters. It seems as if only the military and the families of the military realize there is a war going on in a place called Afghanistan.

On my second night here, our base endured a incoming rocket/mortar attack at 0130 from the "bad guy welcoming committee." It gives you a whole different appreciation of Russian Roulette. We had another rocket attack on our compound last night. Again, fortunately, no one was hurt.

It is all about luck NOT being where the rockets fall. I still have a lot of luck left in me.

Also, yesterday, I attended my 1st "Fallen Hero" ceremony. A formation was called and all available personnel assembled on the tarmac while a band of 4 Army musicians played somber religious music. The melodies were familiar, but I could not recall the songs.

We were called to attention. The order was given to "present arms" as flag covered coffins were slowly driven past us to the awaiting aircraft. We held our salute, until the fallen were aboard.

I knew not these men while unashamed tears quietly fell from my eyes as they passed by me on their final journey home.

I was grateful for the hot sun drying the wetness from my face before the order was given to "order arms."

I ask for nothing but your prayers for the men and women fighting this war with honor, steel, and love for their comrades and Nation.

Today will be a good day.

There is not much to say after reading that, is there?

I realized, with a guilty heart, that I, too, on many days, have not given one thought to the fact that our nation continues to battle in Afghanistan, and that young men and women continue to arrive home in coffins every single day.

I checked five news websites just to see what they might mention of the war: the Atlanta Journal & Constitution, MSNBC.com, Fox News, the Washington Post and the New York Times. I scrolled through each home page, searching for any mention of the war, or of someone killed in action, or anything related. I found nothing.

Five major news sites, renowned as conservative or liberal, and not a single one mentioned the war. Health care, baseball, Tom and Katie, the election, the heat, Syria—important stuff for sure. Of course, you can search the sites and find mentions of the war and KIA or WIA.

But should you have to search? Shouldn’t it be prominent? Shouldn’t someone other than military families care? I wonder what dominated the news cycle in the early weeks of July 1942? Just a guess, but there might have been some mention of a little war we were involved in halfway around the world.

I knew not these men while unashamed tears quietly fell from my eyes as they passed by me on their final journey home.

And so I ask you, on this Independence Day, to step away from your watermelon and beer, to forget about where you can best view the fireworks, to stop debating with your friends the merits of the health care law or the election, and just take a moment to remember.

Remember those first 25,000 who gave their lives so that you could be standing where you are today.

Remember the more than half a million who gave their lives during the World Wars—and the 874,000+ who were wounded.

And remember the 6,200+ who have sacrificed their lives during the War on Terror—and the more than 41,000 who have been wounded.

Remember the 29 who were killed just in the month of June.

And remember the millions who have served faithfully in our nation's military and were neither wounded nor killed, for they too have made sacrifices the likes of which we will never know nor can we ever understand.

These are not abstract numbers.

These are boys and girls, sons and daughters, husbands and wives, mothers and fathers, brothers and sisters, friends.

They are the ones who were willing to step up when the rest of us were not.

I’ve joined a discussion board for parents of Marines and Marine recruits, and one dad who has had two sons serve in Iraq, said that one of his sons stated that he has as many friends who are missing one or more limbs as he has friends who are not.

Everything that we enjoy on this hot July 4th has been bought and paid for by the blood of more than two million brave, noble Americans.

No man is an island, entire of itself...any man's death diminishes me, because I am involved in mankind; and therefore never send to know for whom the bell tolls;
it tolls for thee.

And while Congress debates the merits of cutting or increasing defense spending, there are young people in Afghanistan just hoping the PX will get a shipment of folding chairs so they can use their personal funds to buy one so they have something to sit on in the damn 120° desert.

Say a prayer for them. Send them a letter or better yet, send them some money. But most importantly, remember them. Think of them every single day. Keep them uppermost in our nation’s conscience.

For after all, in a little country called Afghanistan, in a far away, hot, dusty land, we are still a nation at war.

And, God willing, today will be a good day.