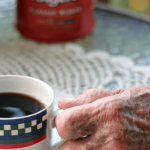 Sometimes, people just want to tell their stories. Sit down with a veteran and see if they'll talk to you. You might be surprised at what you learn. Here's a chat I had with my favorite veteran in honor of Veteran's Day.

So when I had the opportunity to partner with Folgers to share a veteran’s story, of course he’s the veteran I chose.

He came into my life when I was around 11, and although initially I was a bit of a hard-headed kid, and later a rebellious teenager, I grew to love him just as if he were my dad. And my boys have always known him as their grandpa—Papa Jim they call him, since my grandfather was already called Papa.

In December, Papa Jim will turn 90 years old. He’s seen a lot of changes in this world, been a lot of places, and done a lot of things. He’s still sharp as a tack and although retired, he’s up with the sun and works all day long in his woodworking shop.

He might move a little slower than he used to, but he gets around just fine.

We sat down over a cup of Folgers Classic Roast Coffee and I asked him to tell me more about his time in the service. He loves to reminisce, and although we may have a few of the dates mixed up, he remembers names and events pretty well.

It was 1944 when Jim first approached his mother about joining the Marines. He was only 17, and had two younger brothers, and his mother refused to sign for him. So he waited, and in 1945, when he was almost 18, he approached her again and made it clear that one way or another he was joining.

She relented and signed the paperwork. This kid who had never been out of the state of Alabama was about to begin a life-changing journey. It would be two years before he would see his mother again.

Like so many before and after him, Jim first went off to boot camp at Parris Island, South Carolina. It was quite an eye-opening experience, and we’ve heard many anecdotes over the years that I can’t print on my family-friendly blog!

After graduating from boot camp, Jim was sent to Camp Pendleton, California, for infantry training. From there he was sent to occupied Japan. World War II had been technically over for a few months by this point, but the Americans were not beloved in Japan.

He was later transferred to Tientsin, China, where he remained for most of his time in the Marines. During this time, he recalls that his monthly pay was around $50 and he sent half of that home to his parents. Times were hard in Alabama.

Once his commitment to the Marines was completed, Papa Jim left the Marines and tried college but decided it wasn’t for him. In March 1950, he enlisted in the Air Force. He had always loved airplanes and knew that he wanted a career in aviation.

In June 1950, North Korea invaded South Korea and the Korean War began. By this time, Jim’s two younger brothers were old enough to serve and so they both joined the Army. Both were sent to Korea, serving in the same unit.

The two brothers arrived in Korea on October 1, and on October 16, the middle brother was killed. Bloyce had never even met his soon-to-be-born son when he died. Papa Jim says that his mother never got over the loss of her middle child and she was never the same.

I can only imagine the terror of a mother having lost one son and still having two in the service.

It was the Air Force which changed his life, Jim says, because he was able to obtain an education and training to become a Flight Engineer and so he had skills that would allow him to pursue a lifelong career in aviation once he left the Air Force.

At Chennault, he served as a Flight Engineer on B29s, the same type of airplane that dropped the atomic bomb on Hiroshima.

He also spent a couple of years in the Philippines before returning to the Lockheed headquarters in Marietta, Georgia.

The experiences Papa Jim had during the Marines and Air Force marked him for life, implanting lessons in his mind that still impact him more than seventy years later. He attributes the Marine Corps to instilling personal discipline and an ability to get along with people from all walks of life.

When my youngest son, Casey, told Papa Jim that he was joining the Marines, you’ve never seen a prouder Grandpa.

We are proud of our veteran. We love hearing his stories and he loves to tell them. His family gave the ultimate sacrifice with one of their own, a sacrifice which changes you immeasurably.

Have you talked with a veteran lately? Stop by your local Walmart and pick up some Folgers coffee, then go visit a veteran that you know and just ask about their service—and let them know they are appreciated. It’s a small thing, but it can mean so much.

This is a sponsored conversation written by me on behalf of The J.M. Smucker Company. The opinions and text are all mine. I’m partnering with Folgers® at Walmart through the Share A Cup & A Story campaign, to create personal connections with veterans and honor their service to our country.