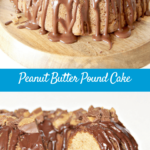 Peanut Butter Pound Cake topped with chocolate glaze and crumbled Reese's Peanut Butter Cups. If they could put Heaven on a plate, this would be it.

So this happened. I made this Peanut Butter Pound Cake on Saturday and it ran smack dab into a bowl of chocolate glaze and then fell over into a pile of crumbled Reese's Peanut Butter Cups.

At least that's how it happened in my mind.

Remember when Reese's first came out? Those commercials with the Hershey's bar and the jar of peanut butter? That's what I kept thinking of when I was making this cake.

I ran across this recipe for Peanut Butter Pound Cake in my old Taste of Georgia cookbook—and if y'all don't have that one then you need to order it right now!—but anyway, this recipe was contributed by Mrs. Jimmy Carter (Rosalynn). The book is copyrighted 1977 and lists her residence as Plains, Georgia, and Washington, D.C.

I thought it was pretty cool that the president's wife was contributing recipes to a junior league cookbook so I decided to give it a test.

Turns out, the former first lady was a pretty good cook! This cake is easy to make, just a regular pound cake with the addition of peanut butter—couple of sticks of butter, sugar, peanut butter, and flour.

The recipe suggests topping the cake with chopped peanuts, which would certainly have been good, but I can't think of peanut butter without chocolate so I went there instead.

Now, a little more about that cookbook. I was interested in the fact that Mrs. Carter had donated a recipe to a cookbook from Newnan when she was from Plains and those little towns are not at all close to each other. So I started researching and while I didn't find much about Mrs. Carter's recipes, I did learn that this cookbook I've loved all these years has been contributing scholarship dollars to young people.

A Taste of Georgia was first published in 1977 and has since raised more than $1 million for charities and scholarships.

And, according to the Newnan Junior League, there was strict quality control—each recipe was "blind-tested" three times!

I hope y'all enjoy this Peanut Butter Pound Cake as much as we did!

I believe it will become a staple on our menu lists since our family loves all things chocolate and peanut butter.

It may even rival my favorite Cream Cheese Pound Cake! 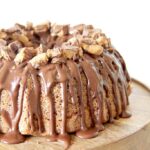 My husband requests I bake this cake every week! We loved it!!!!

My husband requests I bake this cake every week! We loved it!!!!

Hi Lucy, This looks decadent! Also, wanted to let you know that Ron made the Pork Chops & Apples recipe a few days ago and he LOVED it! Thank you for what you do:) xo Holly

Hi Lucy, This looks decadent! Also, wanted to let you know that Ron made the Pork Chops & Apples recipe a few days ago and he LOVED it! Thank you for what you do:) xo Holly