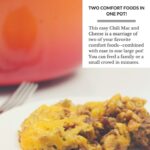 Chili Mac and Cheese is a flavorful blend of two beloved comfort foods—chili and macaroni and cheese. Best of all, it's made in one pot so it's easy! 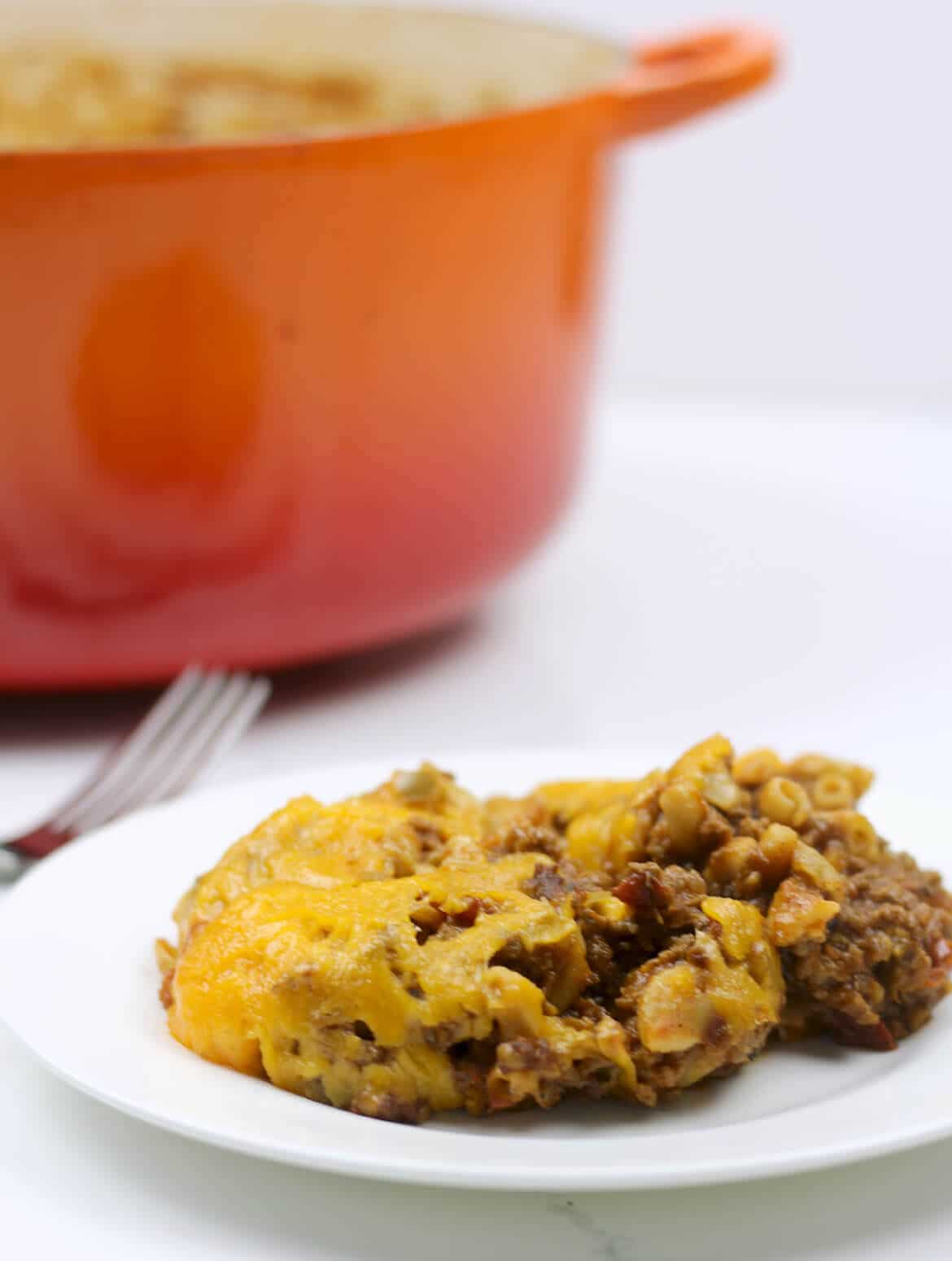 Fall may be my favorite cooking season. I endure August and September, longing for the cooler days of October and November when we can begin braising meats, simmering stews, and baking apple and pumpkin desserts. It's so nice to take a Saturday or Sunday and spend a few hours in the kitchen, chopping vegetables and searing meats and creating slow cooker meals for your family to enjoy.

What do you do on a typical Wednesday, though, when you don't have time to spend hours creating a meal that's nourishing and comforting and just right for a chilly fall evening? You need an easy, one-pot meal like this fabulous Chili Mac and Cheese!

Everything from the meat to the noodles to the sauce is made right in the same pot, and it's ready to eat in about 45 minutes!

This Chili Mac and Cheese stands out from the crowd because I add ingredients that I use in my Classic Chili and Chili without Beans—beef consomme and dark beer. The alcohol cooks out of the beer but the hoppiness adds a level of flavor that gives this Chili Mac sophistication and tastiness that most recipes lack. 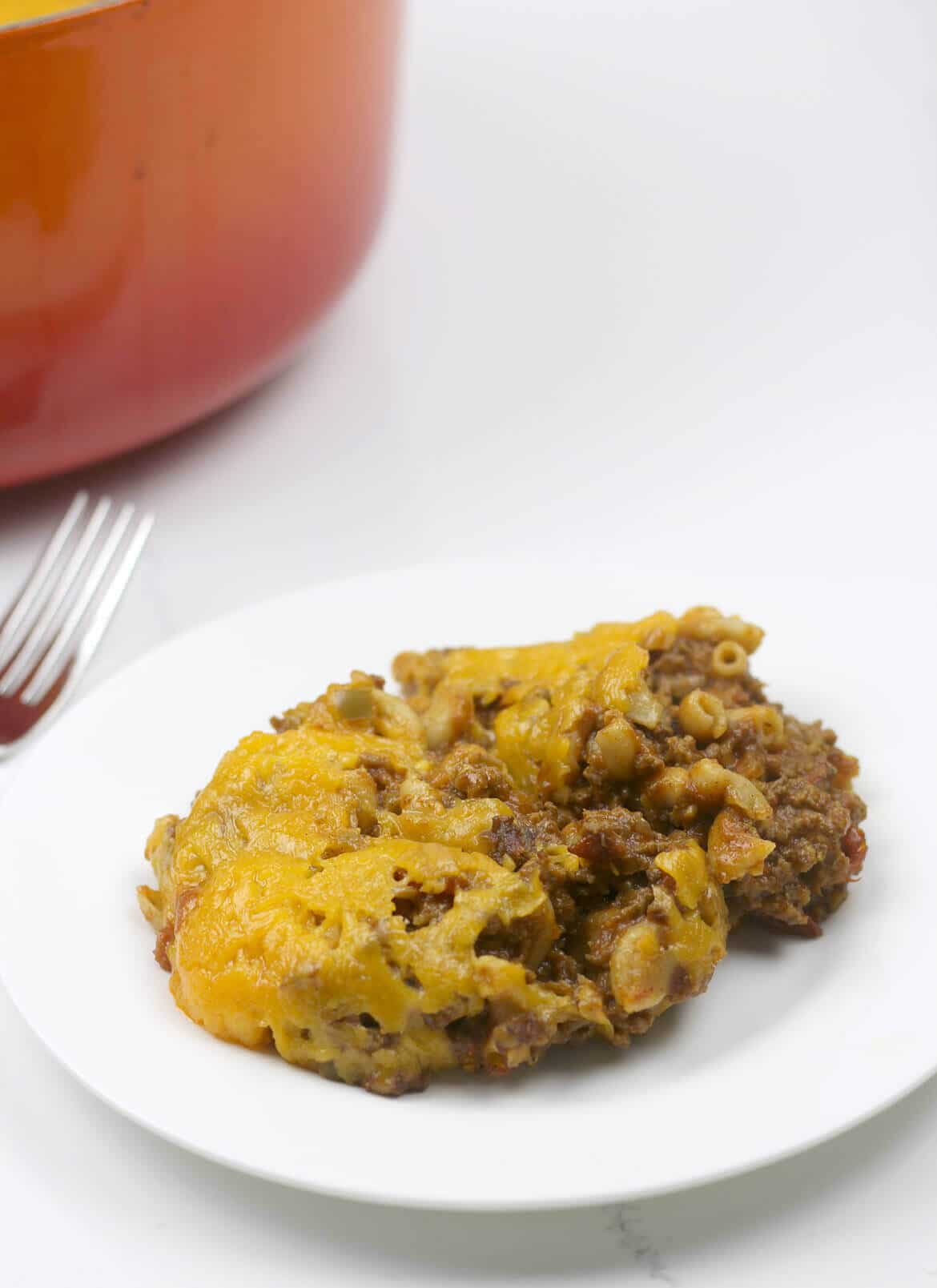 Chili Mac and Cheese - How to Make a Great One-Pot Meal:

You'll need a large skillet or a large Dutch oven for this recipe. I use a cast-iron enamel Dutch oven. Your chopping is minimal in this recipe—just onions, green pepper, and garlic, all of which you can do ahead of time on the weekend.

If I haven't chopped my vegetables ahead of time—or totally cheated and purchased pre-chopped onions and green pepper from the store, WHICH IS FINE TO DO, then I start browning the meat and chop the vegetables while the meat is cooking. I use lean ground beef and don't need to drain but if you use a fattier cut of meat you'll probably need to drain the grease.

Add the sauce, tomatoes, beef consomme, beer, and green chilis and stir until blended. Then stir in the noodles and spices: cumin, chili powder, salt, and pepper. Simmer until the pasta is al dente, then stir in one cup of cheese. Add a couple of cups of cheese on top and either allow the pot to sit covered or place in the oven for a few minutes to melt the cheese.

I like to serve Chili Mac with homemade cornbread or some crusty French bread. Enjoy! 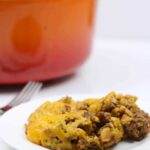 **If you don't want to mess with the oven, you can simply place the lid on the pot and allow the heat to melt the cheese.
Click here to save this recipe to your Pinterest board!