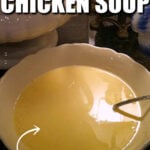 Grandma's Chicken Soup is made with chicken broth, chicken, and a touch of cream—just a simple chicken soup that's great when you're under the weather.

This is the perfect, easy chicken soup to make for a friend who's feeling under the weather, had dental work—or going through chemo. There's little in Grandma's Chicken Soup to upset the digestion and it doesn't require chewing, but it's a little more satisfying than just plain broth.

Grandma's Chicken Soup evolved as a soothing, easily digestible soup for my sister-in-law when she was going through chemotherapy. The original recipe came from her mother and was just broth, milk, and a little butter.

I've adapted the recipe to be slightly richer and a little more flavorful, but it's still quite simple and so, so EASY!

I always make large quantities of soup just in case an army drops by, but you can certainly cut this recipe in half it you don't want to make that much.

➡️ ➡️ Check out all of our Soup recipes!

How to make grandma's chicken soup

Note: For this easy chicken soup, you can use homemade chicken stock or a good quality broth or stock from the grocery store.

2. When the chicken is done, remove it from the pot and coarsely chop, then add the chopped chicken back into the pot.

3. Stir in half-and-half, cream, butter, and salt and pepper. Using an immersion blender, carefully purée the soup until there are no chicken chunks.

4. Turn heat to low and simmer for a few minutes. Grandma's Chicken Soup can be served immediately or will keep in the fridge for 3-4 days.

Tip: I have not frozen this soup and I don't think it would freeze well due to the amount of cream.

If you love to cook and experiment with food, I caution you that this soup is difficult to make. You will be so tempted to add something. Celery, carrots, onion, thyme, whatever...you just want to put something else in that pot. But if you're making Grandma's Chicken Soup for someone who's not feeling well, then don't do it.

Less is more in some cases and, especially for a chemo patient, less is definitely best. Flavor doesn't matter half as much as what their stomach can tolerate and for many chemo patients, foods take on weird flavors anyway, so something that you think would enhance the soup—even just a little—might taste off to chemo patients.

That's it. Velvety, mellow easy chicken soup for the soul.

If you'd like something a little heartier than Grandma's Chicken Soup, try these chicken soup recipes: 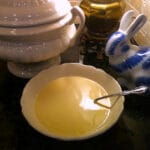 4.75 from 4 votes
save to your free grow.me collection saved to your free grow.me collection!!
Grandma's Chicken Soup is made with chicken broth, chicken, and a touch of cream--just a simple chicken soup that's great when you're under the weather.
save saved! print pin
prep time: 10 mins
total time :40 mins
servings :10 servings
author: Lucy Brewer

Update Notes: This post was originally published August 24, 2011, and on April 15, 2021, was updated with one or more of the following: step-by-step photos, video, updated recipe, new tips.

Totally delicious! I can see how perfect this would be for someone who is ill. My sister-in-law isn't feeling well and I made this. Everyone in the family loved it! Bless you for sharing this.

In this recipe do you use bone in chicken breast? I'm sure it doesn't matter, but still would like to know how YOU make it or which way you prefer.

I use whatever I have on hand, whether it's boneless or bone-in. Either one will work just fine! You could even use chicken thighs if that's your jam, but I don't care for them unless fried so I rarely use them.