One of our favorite restaurant's is Gumbeaux Cajun Cafe in Douglasville, Georgia. You have to get there early to get a table without waiting two hours, but once you're seated the food fest begins.

Our favorite dish is the French Quarter Shrimp, the description of which reads, "Large shell-on gulf shrimp are broiled in our very own special garlic, pepper, butter and herb sauce."

They bring the plate with plenty of sliced crusty bread, which you use to sop up that garlic, pepper, butter and herb sauce—and of course, that's the best part. I could skip the shrimp and go straight to that sauce.

Recipes abound for barbecue shrimp, although the basic ingredients are usually the same: butter, garlic, herbs. Lots of butter and lots of garlic. I played around with several different recipes until I came up with a version that we think is most like Gumbeaux.

Mine is not as good, but it's as close as I can get without driving over to Douglasville. And I don't hear too many complaints, at least until everyone starts to get up from the table and then "Oooh, I'm so full!" That's when you know something is pretty darn good.

The key is to use lots of fresh garlic. This is not a dish in which you want to use chopped garlic from a jar. It just won't have the same punch. Do the work and reap the reward.

How to Make French Quarter Shrimp

Melt one stick of butter in a large skillet and then saute garlic, onion, parsley, rosemary, oregano, cayenne pepper, black pepper and Cajun seasoning for 2-3 minutes until vegetables soften.

Add the remaining butter to the pan, along with the beer, Worcestershire sauce, lemon juice, and hot sauce. Remove from heat and allow to cool just enough so it won't cook the shrimp.

I know it's cheating but peeled shrimp are so much easier to deal with when eating.

You can make this ahead of time and stick the shrimp back in the refrigerator until about 45 minutes before you're ready to serve. The shrimp will pick up the flavors from the garlic and herbs even more if you can wait a few hours.

Then allow the dish to come to room temperature and place in a 400° oven for about 10 minutes or until shrimp are pink and sauce is heated. You need to serve immediately, so have everything else ready to go.

I usually only add a green salad and sliced bread.

Yes, these shrimp are swimming in butter. Yes, this is unhealthy. But it's also not something you will eat every week or even every month. It's a special occasion dish, so treat it as such and enjoy yourself! 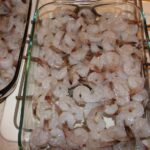 So going to try this! I love their shrimp. But have moved 9hours away. Thank you for sharing!

Off the chain! So close I can't tell the difference. Thanks for sharing. :)

Off the chain! So close I can't tell the difference. Thanks for sharing. :)

Thanks for this! I live in Marietta and make regular trips to Gumbeaux JUST TO EAT THIS MEAL!!! That and the bananas fosters dessert are the only things I have ever eaten there, but it's only because they are THAT great! :)

Amber, we so love Gumbeaux! And, of course, their French Quarter Shrimp is way better than mine, but this will definitely satisfy your craving when you can't make it over there. But next time you go, if you are a chocolate lover, try their chocolate bread pudding for dessert...it is so good!

Thanks for this! I live in Marietta and make regular trips to Gumbeaux JUST TO EAT THIS MEAL!!! That and the bananas fosters dessert are the only things I have ever eaten there, but it's only because they are THAT great! :)