Classic fried green tomatoes made with cornmeal and buttermilk, and just a touch of cayenne for an extra boost of flavor.

Do you ever wonder how certain things came to be? For example, why did someone decide one day that an unripened, hard, green tomato would taste good sliced, battered and fried? Who would have thought of that?

Regardless of how they arrived on the culinary scene, fried green tomatoes have become standard fare in restaurants and many home kitchens, not just in the South but all over the country. Chefs experiment with batter and sauces and serve them with everything from rémoulade to plain old cocktail sauce.

I became a fan of fried green tomatoes as an adult. As a child, this was not a dish that was served at my house. Tomatoes were meant to ripen on the vine and be eaten either as part of a sandwich or just sliced raw as part of the meal, or canned in jars to use throughout the winter.

Nowadays though, when you want a special appetizer, fried green tomatoes seem like just the right choice. Easy to prepare and quick to cook, you can have these ready in about fifteen minutes.

Take a couple of green tomatoes and slice thin. Then mix cornmeal, flour, cayenne pepper, salt and black pepper in a shallow dish, such as a pie plate.

Add buttermilk to another shallow dish and place the dishes close to the stove in an assembly line.

Drain on a paper towel and sprinkle with additional salt. You can add a rémoulade or some other sauce, even a chutney, and serve immediately. 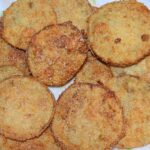 This post is part of my favorite Southern Foods at Home collection.

Fried Green Tomatoes are at the top of my list as my favorite!!!