Jalapeno creamed corn with bacon, scallions, and cilantro is a great side dish for taco night, burgers on the grill, or slow-roasted pork. This cream style corn is a little spicy and everyone loves it!

The bacon got you didn't it? Bacon just makes everything taste better. Well, most things. Bacon is trendy at the moment so folks are putting it in almost anything, even dessert. Sorry, but I don't want bacon in my dessert. But in creamed corn? Yes, please.

Jalapenos, bacon, red bell pepper, garlic, cilantro, parsley, lime—this recipe has it all. It's a versatile side dish that goes with just about any meat or fish, either grilled or roasted. Kids love this creamed corn recipe and adults always go back for seconds!

I've served this Jalapeno Creamed Corn with pork carnitas, oven-roasted brisket, and chicken enchiladas. I would also serve with a hearty fish, like salmon or swordfish. Corn really goes great with almost anything.

You could also do an all vegetable spread and include some grilled portabellas.

You may also like...
Jalapeno Turkey Burgers - spicy turkey burgers with jalapeno and sundried tomatoes

How to make jalapeno creamed corn

Note: I use frozen whole kernel corn for this recipe, but you can certainly use fresh corn if that's your preference. Check out this post on How to Cut Corn Off the Cob.

1. Cook the bacon until crispy.

Use a large skillet or Dutch oven (you'll cook the whole recipe in this pot!) and cook the bacon until it's nice and crispy, then use slotted spoon to remove the bacon and place on a paper-towel lined plate.

2. Cook the vegetables until just tender.

Add chopped onion to the skillet and cook for twenty minutes. You want the onions to brown but not burn. Add a little water if the onions start sticking to the pan and add a little olive oil. Then add the chopped peppers and garlic and cook for another five minutes.

3. Stir in corn, cream, and seasonings.

Add the corn, cream, stock, butter, cumin, salt, and pepper to the skillet. Bring to a high simmer then turn down to medium-low and cook for ten minutes.

Stir in lime juice, parsley, cilantro, and bacon and cook for ten minutes. Season to taste with additional salt and pepper and serve with fresh scallions on top.

Add this Jalapeno Creamed Corn recipe to your next Taco Night and watch it disappear! 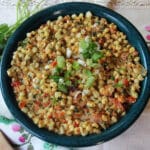 Update Notes: This post for Jalapeno Creamed Corn was originally published May 5, 2014, and on August 9, 2021, was updated with one or more of the following: step-by-step photos, video, updated recipe, new tips.