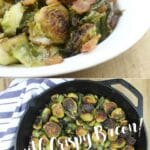 Sautéed Brussels Sprouts topped with a lemon and Dijon vinaigrette, then sprinkled with Parmesan cheese and bacon—a new twist on a favorite vegetable!

So you might have noticed that I have a thing for Brussels Sprouts—this is the third Brussels Sprouts recipe to make this site. The first, and maybe my favorite, was for Caramelized Roasted Brussels Sprouts, sprinkled with a little brown sugar, chili powder and cumin, and roasted in the oven.

The next was for Maple and Balsamic Glazed Brussels Sprouts, which may also be my favorite: sautéed in a skillet and finished with a maple syrup-balsamic vinegar glaze and sprinkled with crispy bacon.

Now I bring you these Sautéed Brussels Sprouts—cooked until slightly charred, then roasted in the oven until tender, and finished with a Lemon-Dijon Vinaigrette, grated Parmesan cheese, and crispy bacon.

This recipe was inspired by the most amazing Brussels Sprouts I've ever had, which can be found at Bavette's Bar & Boeuf, a fabulous steakhouse in Chicago. You can read more about Bavette's in this Chicago Food Guide.

How to Cook Sautéed Brussels Sprouts

The Brussels Sprouts at Bavette's are charred, and for a home cook without professional cooking equipment, there's a fast, fine line between charred and burned. You have to keep an eye on these sprouts and turn them frequently.

You'll have to check some of the smaller ones first so they don't burn. I usually drizzle in some olive oil partway through the cooking process to keep the sizzle going, then start stirring gently and sort of move to the side the ones that are brown so you can turn down the ones that are not.

Remove the Sautéed Brussels Sprouts from the skillet and stir in fresh lemon zest, Lemon-Dijon vinaigrette, grated Parmesan, and crispy bacon and voila! 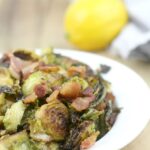