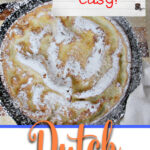 This Dutch Baby German Pancake is light, fluffy, and delicious with a sprinkle of powdered sugar or a bit of jam—and best of all, it's quick and easy!

Have y'all ever made a Dutch Baby German Pancake? I had not, until this morning. We will have a house full with our kids this coming weekend, and I was trying to come up with something different to fix for breakfast.

I've seen recipes for a Dutch Baby German Pancake in magazines and online but never tried it. I always figured it was complicated and since I'm not a morning person I tend to stick with uncomplicated or Do-It-The-Night-Before recipes, like my Baked French Toast Casserole with Streusel.

But when I started paying attention to what's involved, I realized that the recipe for Dutch Baby Pancake is just about the easiest thing ever. Ever.

What is a Dutch Baby Pancake?

A Dutch Baby Pancake is basically a large popover, similar to Yorkshire Pudding. It's always baked in the oven and is a little thicker than regular pancakes. Plus, there is no leavening used in the batter as you would with pancakes.

You may also like...
Easy Buttermilk Pancakes - this pancake batter makes up light and fluffy pancakes that kids love!

There are multitudes of recipes and versions out there for a Dutch Baby Pancake, but I tried this one from David Eyre, which originally appeared in the New York Times in 1966, and which, according to Wikipedia, was based on a German recipe from the 1919 edition of Victor Hirtzler's Hotel St. Francis Cookbook.

If a recipe from 1919 is still hanging on and has made it to the blogosphere then it must be good, right? According to Martha Stewart, Eyre's recipe makes a pancake that is "a more delicate version of the classic puffy German pancake," but that's fine with me. I like this delicate version.

This Dutch Baby German Pancake is so light it's almost ethereal. There's just enough crispiness around the edges with a slight softness in the center. And I didn't change a thing other than adding a dash of salt. It's really perfect just as it is.

How to Make a Dutch Baby Pancake

I did try to double the recipe but didn't like the way that version turned out. If you're serving more than 5 I would suggest simply making two pancakes. It's so easy that making two is really no trouble.

Step 1. Preheat your oven to 425°. Place butter in a 12-inch ovenproof skillet and set the skillet in the oven to melt the butter.

Cook's Tip: The skillet should be hot when you pour in the batter.

Step 2. Combine the flour, milk, eggs, nutmeg, and salt and whisk until blended. Be careful not to over-mix!

Step 3. Pour your Dutch Baby German Pancake batter into the hot skillet. Bake 15-20 minutes, until the pancake is puffy and deep golden brown.

You'll pull this puffy, golden, beauty of a pancake from the oven, squeeze a little fresh lemon over it and sprinkle it with powdered sugar. You can add toppings if you'd like: I added a little of my Mama's homemade plum jelly and that was perfect. 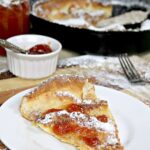 You can mix up the batter the night before and leave it in the refrigerator until ready. Allow the batter to come to room temperature before using.
Click here to save this recipe to your Pinterest board!

Update Notes: This post was originally published April 2, 2015, and on October 28, 2019, was updated with one or more of the following: step-by-step photos, video, updated recipe, new tips.