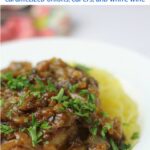 We have eaten these pork chops four times in the last couple of months because this recipe is THAT good. My husband loves caramelized onions and honestly, almost anything that you add caramelized onions to is going to be amazing.

This time of year, I'm partial to braising meats or slow-cooking soups and stews. I could eat soup every single day!

One of the reasons this pork chops recipe is so great is that it has that low and slow flavor but it actually only takes about an hour—less if you opt not to caramelize the onions as long as I do, which would be perfectly fine.

How to Make Pork Chops with Caramelized Onions

This recipe is great for a weeknight dinner because it's all done in one skillet, which is my favorite kind of recipe!

First you'll sear the pork chops, then remove and add the onions to the skillet.

Pro tip: The original recipe calls for cooking the onions about 4 minutes, but I cook them at least 30 to get a good caramelization.

Then you'll just add a little white wine, some chicken bouillon, and capers before you add the pork chops back to the skillet.

Cook everything for about 15 more minutes, flipping the chops once.

When the pork chops are done, remove them to a plate and bring the liquid in the skillet to a boil, then add the cream and reduce for about 2 minutes. That's it!

This is a great make ahead recipe so feel free to cook the pork chops early in the day or even the day before, refrigerate, and just heat and serve when ready. 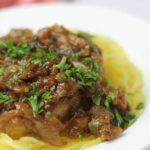