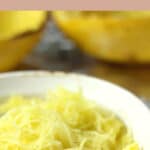 Roasted Spaghetti Squash is a healthy alternative to carb-heavy dishes like pasta and rice. It's nutritious and delicious and super easy to prepare!

One of my favorite ways to serve roasted spaghetti squash is with a simple tomato sauce, like Marcella Hazan's famous tomato sauce. Add a green salad and you have a lovely, hearty, vegetable-based meal. You can also toss the spaghetti squash with olive oil, salt, and pepper, and serve it as a side with almost any meat dish.

Preheat the oven to 400 and then cut the spaghetti squash in half—and let me warn you, these little suckers are hard to cut into! As Elmer Fudd would say, "Be vewwwy, vewwwy cahhful!" I usually get the knife in partway and then just kind of bang the whole thing on the cutting board, which causes the knife to slip in all the way. Then pull it toward one end and do the banging thing again. This is not a scientific nor a culinary school-recommended method of cutting spaghetti squash but it works for me. So, however you manage it, get the squash cut in half, scoop out and throw away the seeds and pulp, then place the squash halves on a large, rimmed baking sheet covered in parchment paper or foil.

Drizzle the squash halves with olive oil and liberally sprinkle with salt and pepper. Then flip the spaghetti squash halves over so they are cut-side down and roast in the oven about 45 minutes.

Remove the squash from the oven. Using a fork (and a hotpad!), scrape the insides of the spaghetti squash to release the flesh, which will come out in long strips resembling noodles. Scrape all the way down to the skin and place the squash in a bowl.

At this point, you can serve the roasted spaghetti squash plain, with a little more olive oil and salt and pepper to taste, or you can add a sauce or include the squash in a dish with other ingredients. It's so versatile and really brings out the flavors of other foods. 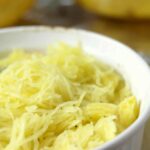 I Love spaghetti squash! Thanks for this easy recipe, Lucy:)

I Love spaghetti squash! Thanks for this easy recipe, Lucy:)