Apple Sausage Stuffing with mushrooms, sage, and other fresh herbs and vegetables is a delicious variation of traditional stuffing.

Stuffing is not a traditional Southern Thanksgiving dish. We always have Southern Cornbread Dressing with Giblet Gravy, but every now and then I like to throw this Apple Sausage Stuffing out there as well.

I've tweaked this recipe over the years as I've learned more about cooking. Now I use sourdough bread which I toast to help keep it from getting soggy in the broth. I also toast the pecans, which gives them a richer, nuttier flavor.

Note: This stuffing recipe is not intended to be cooked inside the turkey. See Stuffing Your Turkey: Just Don't Do It!

This Apple Sausage Stuffing recipe is one of those recipes in which it's important to practice mise en place, a French term meaning to have all ingredients ready prior to commencing cooking.

Cook's Tips: There are some things you can do for economy of time when making this Apple Sausage Stuffing recipe. While the bread is toasting, chop the mushrooms if you didn't buy pre-sliced. While the pecans are roasting, don't do anything—otherwise you might forget about the pecans and have to start over. Don't ask me how I know.

How to Make Apple Sausage Stuffing

Step 3. In a large mixing bowl, put the toasted bread, dried thyme, rubbed sage, and a little salt and pepper, and gently stir. Add the pecans and mix them in.

Step 4. Add butter to a large skillet and sauté the onions, celery, and mushrooms. Sprinkle the vegetables with salt and pepper.

Cook's Tip: Don't cheat and use only dried herbs. Your Apple Sausage Stuffing will not taste as good! Fresh herbs are the best, with a little dried mixed in!

Step 6. Remove vegetables from skillet and add to the bowl with the bread.

Step 7. Cook sausage in the same large skillet until done.

Make Ahead and Freezing Tips

Yes, you can! Just don't bake it! You can have everything ready the day before and bake your Apple Sausage Stuffing before serving.

Alternatively, you can do the whole thing, bake it, then place in the freezer for about a month. Thaw completely then reheat in the oven and garnish with fresh parsley.

Your kitchen is going to smell like the best of fall...the earthy herbs mixed with fruity apples and sausage...it's heavenly!

If you've tried this Apple Sausage Stuffing recipe, please rate the recipe and leave a comment below! 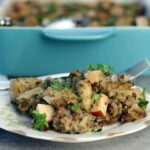 Update Notes: This post was originally published November 2, 2011, and on November 27, 2019, was updated with one or more of the following: step-by-step photos, video, updated recipe, new tips.

You may also like...
The Thanksgiving Tablecloth - a favorite family tradition

Can you leave out apples

I guess you could, and just have a sausage and mushroom stuffing. I think the apples give it great balance of flavor. You might want to try my cornbread dressing recipe.

You call for rubber sage and dried thyme at one point but do not give measurements f the dried herbs and say further down not to use dried herbs, can you clarify?

Hi Grace, Thanks for catching that! Recipe corrected now!

Can I make this the night before

Yes, I wouldn't bake it early though.

I've been looking around for a new stuffing recipe for Thanksgiving (we try a new one every year), and this one might be the one. We love apples, sausage and especially apple sausage. I will definitely saute the mushrooms. Thank you for the recipe and have a happy Thanksgiving!

I've been looking around for a new stuffing recipe for Thanksgiving (we try a new one every year), and this one might be the one. We love apples, sausage and especially apple sausage. I will definitely saute the mushrooms. Thank you for the recipe and have a happy Thanksgiving!