Creamy mashed potatoes with butter and sour cream will have your family coming back for seconds every time!

Nothing says comfort food to me like homemade, creamy mashed potatoes. Butter, cream, warm potatoes...there's just something about that combination that feels good from your tummy to your soul.

I use the same combination of ingredients for my real homemade mashed potatoes as I do for my weeknight mashed potatoes: butter, half and half or cream, sour cream, and of course, potatoes.

How to Make Mashed Potatoes

Start by peeling a 5 lb. bag of potatoes. Cut them in half or quarters, depending on how large they are, but don't cut them into small pieces. Place potatoes in a large Dutch oven and cover with cold water then place on the stove and bring to a boil. Once the potatoes are boiling, turn down to a rolling boil and cook for 20-30 minutes, until fork tender (meaning a fork pierces or splits the potato easily).

Drain the potatoes and then return them to the pot. Turn the heat on low for just a few minutes, stirring the potatoes gently to they don't scorch on the bottom. This helps dry out the excess water. After about five minutes, remove the pot from the heat. Using a potato ricer, mash the potatoes into a large bowl.

Once all the potatoes have been riced, add the melted butter and the cup of sour cream. Pour in about a cup of the half and half. Stir gently to incorporate all and add salt and pepper to taste. Then continue to add half and half until the potatoes are the texture that you want. Some people like them stiffer and some people like them a little smoother. I generally end up using almost the whole 2 cups, probably at least 1 ½ to 1 ¾.

If you're not serving these immediately, just cover and place in a 200° oven until ready. You can dot a little extra butter on top if you like to help keep the potatoes moist and just stir it in when you're ready to serve. 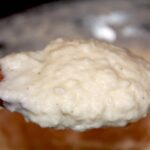 I just came across your site and I love your recipes! I hope you come and visit ours !