To some, the gravy is what Thanksgiving is all about. On this day of decadence, you have full rein to douse everything on your plate with gravy, from the turkey to the dressing to the mashed potatoes and whatever is in between.

I must confess, I've never been a good gravy maker. My first attempt at giblet gravy was with my best friend, Mary Ellen, when we were both away from home for the first time at Thanksgiving. As very young wives and mothers, we believed we could whip up the entire meal. There was no Internet, no cell phones and our own mothers were hundreds of miles away and busy with their cooking, so we were on our own. We started out okay, heating some butter and adding flour. Then we added something liquid, broth, I suppose. Then we decided it was too thin so we added more flour. Then more broth. Then more flour. This went on until we had about a gallon of inedible wallpaper paste, at which point we decided to call it a draw and served our meal with no gravy. To this day, I rarely attempt to make regular gravy.

Giblet gravy, however, is a little more forgiving than regular gravy, despite that disastrous first attempt. I've always been an avid reader of food magazines, and about ten years ago I came across a recipe for giblet gravy with cream in Bon Appetit magazine. I tried it and was hooked. Just the slight addition of ¼ cup of cream gives this gravy a flavor lift, while still incorporating the traditional giblets and turkey stock and drippings. 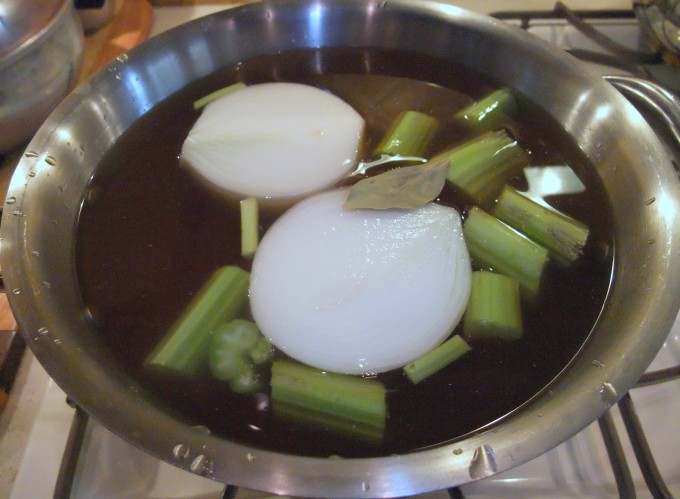 You can use the giblets and neck to make stock while the turkey is cooking: just add them to a pot and add water and broth, onion, celery, carrots and a bay leaf. Bring to a boil and then turn down to a simmer for about 2 hours. You can also just simmer the giblets for about 45 minutes or until done and use canned stock for the gravy, although it won't be as rich and flavorful. Chop the neck meat and giblets into small pieces once cooked.

You want to be sure to have everything ready before you start cooking the gravy. Measure the cream, chop the meat, measure out the flour, the stock and the reserved turkey pan juices. Otherwise, your gravy can turn into glue while you're trying to find something or pour out the correct amount.

Melt 5 tablespoons butter over medium heat in a large, heavy pot. Add 5 tablespoons flour and whisk for 2 minutes. Slowly whisk in 3 cups turkey stock, ¼ cup cream and up to 1 cup of juices from the roasting turkey. I also save a couple of tablespoons of my pre-baked dressing and throw that in the mix.

Simmer the gravy for about 5 minutes, whisking frequently, until it thickens slightly and reaches the consistency you like. Add the chopped meat and giblets and season to taste with pepper. You probably won't need additional salt if you're using drippings from the turkey. And if you want to make traditional Southern giblet gravy, you need to add a chopped, hard-boiled egg.

There you go! Giblet gravy that's easy and will wow your guests with how awesome it tastes.

Be sure to spread my flavor-packed Herb Butter on your turkey and use those drippings in your gravy! 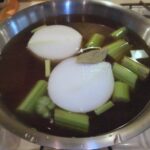 To make the stock:

To make the gravy:

Adapted from Giblet Cream Gravy in Bon Appetit magazine, circa 1999: http://www.bonappetit.com/recipes/1999/11/honey-brined-turkey-with-giblet-cream-gravy
Click here to save this recipe to your Pinterest board!