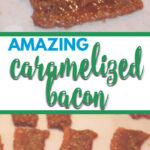 Caramelized bacon is crispy, candied bacon made with a pecan, brown sugar, and maple syrup paste—it's the first thing to go at gatherings!

The title says it all, doesn't it? This was the first recipe I saw when I bought Ina Garten's cookbook, Foolproof, and let me tell you, people love this bacon. It is crispy and chewy at the same time...sweet, salty...a little heat from cayenne pepper...and it's BACON.

While the recipe itself is pretty easy to make, putting the paste on the bacon is kind of a pain but so worth it.

How to make caramelized bacon

Cook's Tip: You need a food processor for this recipe so if you don't have one then now's a good time to treat yourself! I use this one and love it, but you could certainly use a smaller one.

Step 1. You place everything in the food processor and pulse until a paste forms. Have the bacon laid out on the racks and use a spoon or your fingers to spread the paste on the bacon.

Pro Tip: Don't spread the paste too thickly or the bacon won't get crisp. I usually spread it with my fingers because it's a little easier, but if you use a spoon be sure you have a cup of hot water to dip the spoon in.

Step 2. Bake! The trick is to cook the caramelized bacon until it's very dark but NOT burnt! Since ovens cook differently, start with the time on the recipe but if the bacon isn't dark then leave it in there a bit longer.

And remember that it will take a while after you take it out of the oven to get crispy--but soon you'll have a plate of caramelized bacon and you can watch your guests fight for each piece! 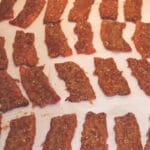 I usually quadruple this recipe since we have a large gathering. The bacon can be prepared and baked early in the day.
Click here to save this recipe to your Pinterest board!

Here are some of my favorite Ina Garten appetizers:

Update Notes: This post was originally published February 19, 2014, and on May 13, 2019, was updated with one or more of the following: step-by-step photos, video, updated recipe, new tips.

Wow! I am going to try this recipe soon.

Wow! I am going to try this recipe soon.

I'm going to make these for our Christmas party this year at church! Can't wait! Looks delish!

I'm going to make these for our Christmas party this year at church! Can't wait! Looks delish!