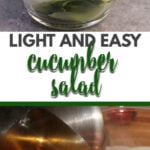 Cucumber Vinegar Salad is a simple, classic recipe of sliced cucumbers and onions in vinegar. The cucumbers are crisp and tangy with a touch of sweetness—perfect for a snack or simple side dish.

If you want a cool, refreshing summer salad for your next picnic, you will love this recipe for old-fashioned cucumbers and onions in vinegar. It's so simple and so easy and keeps for several days in the refrigerator.

I love a great make-ahead dish!

Did you know cucumbers are a nutritious and low-calorie vegetable choice? That's what I love about summer--so many healthy and fresh options!

We usually have a bowl of this cucumber vinegar salad in the refrigerator all summer. You can easily add to it as the week goes on by dropping a few more cucumber slices in the vinegar.

Since this salad consists of cucumbers and onions in vinegar, that's almost all you need to make it. Sprinkle in some celery seeds, a little sugar, and a little salt and pepper and that's it!

You may also like...
Cucumber Tea Sandwiches - dainty tea sandwiches with a slice of cucumber and a dill-cream cheese spread

How to make cucumber vinegar salad

Slice some cucumbers and onions into a bowl and sprinkle with salt and pepper.

Then combine vinegar, water, sugar, celery seeds, salt, and pepper in a saucepan and cook just until sugar dissolves but not to the point of boiling.

Pour the hot vinegar mixture over the cucumbers and onions.

Cool the cucumbers and onions until they are cool as a cucumber (I couldn't resist that, sorry) and then refrigerate for several hours before serving.

Cucumber Onion Salad is best when the cucumbers and onions get cold and a little crispy.

How to cucumber salad

The Cucumber Vinegar Salad will keep in the refrigerator for several days. I use an airtight container so my whole fridge doesn't smell like vinegar.

Are you looking for a cucumber salad recipe with sour cream? Try this one for Creamy Cucumber Salad from my friend Stacey at SouthernBite.com.

If you've tried this recipe, please rate the recipe and leave a comment below!

Keeps in refrigerator for several days and is better the second or third day.

Update Notes: This post was originally published June 14, 2013, and on July 28, 2021, was updated with one or more of the following: step-by-step photos, video, updated recipe, new tips.

This post is part of my favorite Southern Foods at Home collection.

This site uses Akismet to reduce spam. Learn how your comment data is processed.

I have thoroughly enjoyed your Southern Classic recipes and have pinned most of them since I use Pinterest as my go to cookbook while in the grocery store. Although all are familiar, there are always different twists to even someone's favorite often cooked dishes. I can't wait to try your recipes. Thought I might pass along a favorite of mine which came from my mother since your cucumber and onions recipe made me think of it. You would think it would taste horrible but it's actually quite good. No measurements -- just slice cucumbers and onions, slather them up with sour cream and salt and pepper. So good. I think somewhere I've seen folks add a bit of acid such as fresh squeezed lemon, just a tad to this dish. Again thank you for sharing all these delicious sounding recipes. Rebecca

This site uses Akismet to reduce spam. Learn how your comment data is processed.