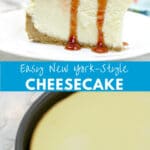 Classic Cheesecake Recipe for a New York style cheesecake that is perfect every time! It's rich, creamy and luscious and can be served plain or with a caramel, chocolate, or raspberry topping.

My family tends to disagree about a lot of things. We are almost all on a different place on the political spectrum. Some of us are Baptist and some Lutheran.

David loves his old Southern gospel music while I love classic rock. Mal and I would rather have vegetables or a salad over meat but the boys would take a steak every time.

But desserts we usually can agree on. Everyone loves chocolate. And everyone loves cheesecake. If we all go out to dinner it's not uncommon for us to end up at the Cheesecake Factory for dessert, and everyone orders something different, which is great because we get to sample each other's. Except for Brian who doesn't share.

A classic cheesecake is a great dessert if your family has different tastes because you can dress it up with toppings geared to please everyone, and you can make cheesecake several days before you need to serve it.

I usually include a fruit-based topping like raspberry sauce, or my husband's favorite caramel sauce, and something chocolate, all of which work perfectly with this classic cheesecake recipe. Of course, we also love this simple and easy Chocolate Chip Cheesecake.

Making homemade New York-style cheesecake sounds a little daunting but it's actually one of the easier desserts to make, especially with this simple recipe. Everything mixes together quickly and then you just bake.

How to Make Classic Cheesecake:

For this cheesecake, you'll really need a stand mixer, although if you don't have one then you can use a hand mixer, it will just take a bit longer. The key is mixing the cream cheese until all of the lumps are out.

Add the eggs and yolks, 2 at a time, then the rest of the ingredients and mix until everything is well blended.

Pro tip: Here's my secret to baking a cheesecake that doesn't crack across the top: I've always thought a water bath was way too much trouble, but I do place a large roasting pan filled with water on the bottom oven shelf—and my cheesecake never cracks! I think the steam from the water helps.

And the cooking technique—the credit for which all goes to Ina Garten—is probably another reason why this cheesecake doesn't crack. After the cheesecake has baked for the recommended time, Ina says to leave it in the oven with the door slightly open and the heat off.

At this point, your cheesecake is going to still be a little jiggly and you'll think it isn't done, but it will firm up as it sits in the refrigerator.

But in any case, if your cheesecake cracks then hey, it's still cheesecake! Nobody is going to say, "I can't eat that cheesecake because there's a crack in it."

So don't be intimidated...grab your springform pan and your mixer and whip up a delectable surprise for your family. 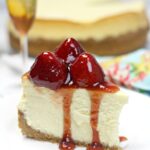 *You want to scrape the bowl and beater frequently to ensure all the cream cheese is thoroughly blended and there are no lumps, because cream cheese lumps will not melt in the oven.
Click here to save this recipe to your Pinterest board!

I've never made a cheesecake... crossing my fingers. Yall pray for me. Lol

Great! I will make the cheesecake tomorrow!

Years ago, and is mean years ago, Regis and Kathy Lee had the NY Firemen on the show and they had won some contest with their recipe for cheesecake. I went right to town and purchased a set of spring form pans and made it! LOVED IT...but you know what? I haven't made it since! Your post has inspired me to make it for a dinner party and I will use your recipe! Meanwhile, I am going to compare to see if it is one and the same! Thank you for sharing your love of creative cooking, recipes, tips and inspiration. <3

Thanks, Ms. Geri! Let me know how it turns out :) Try to make the day before and let it sit in refrigerator overnight. The recipe for the raspberry sauce is also on the blog and the caramel sauce is basically my caramel frosting recipe but just don't beat it into frosting.