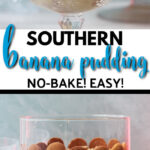 Southern Banana Pudding is a simple dessert: inexpensive, easy, no baking required in the heat of a Southern summer, and almost everyone likes it.

And to be fair, I'm not sure whether banana pudding is actually a Southern creation or not, but I do know for sure that there has always been banana pudding gracing the table of any church potluck, funeral dinner, or family reunion I've ever attended.

So whatever the origin, here in the South we claim banana pudding as one of our own!

You may also like this recipe:
Cream Cheese Banana Pudding - with a graham cracker crust and a layer of cream cheese filling!

I like to experiment with different varieties of a dish, but I've discovered that banana pudding lovers—not just those of us who like it, but those who LOVE it—don't want experimentation. They want a good, old-fashioned banana pudding.

That means custard, bananas, and vanilla wafers. Maybe a meringue or whipped cream gracing the top, but no other deviations.

But sometimes, don't you want more than fine? How about instead of fine, we go with decadent, rich, and luscious—but still easy banana pudding?

A few years ago I happened upon a recipe for banana pudding in The Gift of Southern Cooking, by Scott Peacock and Edna Lewis. These are two Southern cooks whom I revere, and while I don't follow the whole recipe for their banana pudding, as they use angel food cake and meringue and I'm not crazy about either one, I do follow the custard part to the T.

That's right, 12 egg yolks and heavy cream. That's the secret and what sets this Southern Banana Pudding recipe apart from all the rest. You can't make a to-die-for custard with a measly 3 or 4 egg yolks and regular milk. You gotta have the good stuff and lots of it!

How to Make Homemade Banana Pudding

You're going to start this Southern banana pudding recipe by steeping the vanilla bean in the milk and some cream. Twist the vanilla bean but don’t scrape it and then add it to a medium pot with milk and 1 cup of the cream. Heat slowly until almost simmering and then cover, remove from heat, and allow to steep.

Cook's Tip: Allow the milk to steep with the vanilla bean for 20-30 minutes for maximum flavor.

While the milk is steeping, go ahead and slice your bananas so they are ready to layer and get your vanilla wafers ready also. It only takes a few minutes to make the custard, so don't worry about the bananas getting too brown.

Next, put the egg yolks in a bowl and whisk in the sugar then the flour and salt.

Cook's Tip: If you're planning ahead, use vanilla sugar: put some sugar in a container with a vanilla bean and let it sit for a few weeks.

Whisk until completely smooth and make sure there are no lumps. Remove the vanilla bean from the milk and whisk a little of the warm milk into the eggs to temper the eggs.

Slowly whisk the rest of the milk into the egg yolks. Then put all the goodness back into the saucepan and cook over medium-high heat until the custard thickens, whisking constantly.

Cook's Tip #1: This should take about 5 minutes. If you don't have a whisk with a large, heat-proof handle then you'll probably want to use an oven mitt to hold the whisk since it can get pretty warm.

Cook's Tip #2: Don't try to skip out on the whisking constantly step or you will end up with scorched custard and you will cry.

Cook's Tip #3: Be sure you scrape the bottom and sides of the pan while whisking.

After the custard begins to boil, cook for one minute longer and then remove it from the heat. The custard should be very thick at this point.

Strain the banana pudding custard through a fine-meshed sieve into a large bowl.

Immediately whisk in the remaining 1 cup of cream and the three teaspoons of vanilla.

And that is the secret to this amazing Southern Banana Pudding: whisking in the cream after cooking will make your custard smooth and silky and utterly delicious.

Continue whisking until the cream is completely mixed in.

How to Layer Banana Pudding

Now start layering: Spoon a thin layer of warm custard on the bottom of the dish, and cover with a layer of vanilla wafers.

Cook's Tip: I like to crush some of the wafers and leave some whole.

Add a layer of sliced bananas and then start over with the custard. Continue until you run out of wafers and bananas, and finish with a layer of custard, then crumble a few vanilla wafers over the top.

At this point, you can set the banana pudding aside and make your homemade whipped cream. Just pour heavy cream in your stand mixer, add a little sugar and vanilla, and beat for 3-5 minutes until stiff peaks form.

Recipe for easy Homemade Whipped Cream with a video tutorial to help!

Spread the whipped cream over the top of your custard and you will have the best Banana Pudding ever!

Can You Freeze Banana Pudding?

Short answer, NO. The custard would separate and become watery and the bananas would get mushy.

How Long Does Banana Pudding Last?

Southern Banana Pudding with homemade custard is best eaten the day you make it. You can keep it in the refrigerator for a couple of days, but the texture will start to break down and become a little watery and the wafers and bananas start to get mushy.

Enjoy this Old-fashioned Banana Pudding at your next family gathering!i

If you love this recipe, please rate with ★★★★★ and leave a comment below! 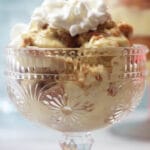 Putting it all together:

Update Notes: This post for Southern Banana Pudding was originally published February 14, 2011, and on April 22, 2019, was updated with one or more of the following: step-by-step photos, video, updated recipe, new tips.

Can this be made with out the vanilla Bean?

@Lucy Brewer, Can you half this recipe?

The custard would not taste as good!

I recently lost my banana pudding recipe and was looking for a similar recipe. I almost didn't try this recipe because the method was so different from how I'm used to making pudding. I'm used to cooking sugar, milk and cornstarch together, the tempering eggs, let it thicken, add vanilla and butter and put in ice bath. This recipe is better because it gets very thick and you can get it to desired consistency by adjusting the milk you add at the end.

As written, I give recipe 4 stars. It was way too thick and creamy for my taste but the flavor is amazing. I adjusted recipe to 8 or 9 egg yolks, and add mixture of half and half and heavy cream at the end. I also decrease the vanilla since it already has a great vanilla flavor from steeping. This gives a better consistency for my taste and absorbs better into the wafers.

How can you say it was too thick and creamy when you didn't even follow the recipe?

Feast on the Cheap