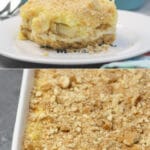 Cream Cheese Banana Pudding is a delicious and easy version of banana pudding with a graham cracker crust, a cream cheese layer, vanilla custard, and of course, bananas!

At most Southern gatherings, there are a few dishes that are sure to grace the table: fried chicken, barbecue, pound cake, chess pie, and banana pudding. And it's almost sacrilege to mess with any of those recipes.

While there may be slight variations, most everybody's version of each of those favorites is going to be pretty close.

I wanted to test the waters though and see if I could come up with a different version of banana pudding. Not better, as my Homemade Banana Pudding is pretty darn awesome—just different.

Don't forget to PIN THIS RECIPE to save for later!

Why This Recipe Works

Pro Tip: In lieu of the homemade custard, you can omit the cream, eggs, and flour and instead use:

You may also like
Cherry Cream Cheese Pie - quick and easy no-bake dessert!

Start by making a simple graham cracker crust and bake it for about 8 minutes.

Add a layer of bananas and then a layer of custard. You can add as many layers of bananas as you like: one over the graham cracker crust and one in between the filling is what I usually do.

And over the bananas I place a layer of crumbled vanilla wafers.

For the custard, I use the same custard recipe that's in my Homemade Banana Pudding.

It's an old-fashioned vanilla custard recipe that I got from The Gift of Southern Cooking: Recipes and Revelations from Two Great American Cooks, Scott Peacock and Edna Lewis' cookbook collaboration.

Pro Tip: If you're in a hurry, you can use a box of vanilla pudding mix and add sweetened condensed milk for some of the milk. It's not as good as homemade but it will do in a pinch.

For the top layer, I crumble some vanilla wafers and sprinkle them over the custard. And that's it!

Pro tip: You can add a layer of whipped cream over the custard if you like, but I thought that might be a bit much so I kept it simple with just the cream cheese and custard.

If you love this recipe, please rate with ★★★★★ and leave a comment below! 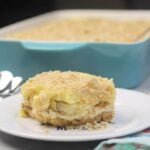 Tips for the Best Cream Cheese Banana Pudding:
Click here to save this recipe to your Pinterest board!

Update Notes: This post was originally published February 15, 2018, and on January 12, 2019, was updated with one or more of the following: step-by-step photos, video, updated recipe, new tips.

Can't wait to try this out