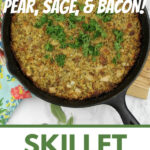 This Skillet Dressing Recipe with Pear, Sage, and Bacon is just right for a smaller crowd—and it's bursting with fresh flavor!

Why is it that we only have dressing at Thanksgiving? Or is that just me? Are the rest of you eating fabulous Southern Cornbread Dressing all year long and I just don't know about it?

It's not that dressing is difficult to make—it's really easy—but for some reason, it seems to be reserved for special, holiday occasions. Maybe because one recipe for Cornbread Dressing makes A LOT of dressing.

I wanted to create a smaller version of cornbread dressing in a cast iron skillet, so I started with my Southern Cornbread Dressing and cut the quantities in half. But I also wanted to create a unique skillet dressing recipe with different flavoring so that the dressing would complement more than just traditional turkey breast, like grilled steak or pork chops, or maybe just a roasted chicken.

You may also like...
15-Minute Southwest Chicken Skillet Dinner - great quick and easy weeknight meal from Family Food on the Table.

I tossed in some crispy bacon, added fresh sage, and then cut up a juicy, red pear—the result is wonderful, a moist dressing with subtle sweetness from the pear and salty goodness from the bacon. We love this skillet dressing recipe!

How to Make Cornbread Dressing in a Skillet

For this skillet dressing recipe, I used half a pan of cornbread. You could just make a smaller batch of cornbread, but I like to have the extra cornbread for soup.

Step 1. Make cornbread and then crumble half the of it into a large bowl, about 3 ½ cups. Set aside.

Cook's Tip: Cornbread can be made up to 3 days ahead.

Cook's Tip: If you don't want to use bacon drippings then just use extra butter.

Step 3. Preheat oven to 375. Add butter to the reserved bacon grease and place the skillet in the oven. Allow the butter to melt and get hot but not to the point of smoking.

Step 4. Mix crumbled cornbread and the other dry ingredients in a large bowl. Add two cups chicken stock and stir gently until mixed well. Add salt and pepper to taste.

What to Serve with Skillet Cornbread Dressing

This skillet dressing recipe goes great with almost any roasted or grilled meat. You can also include some traditional Thanksgiving accompaniments, like my Cranberry Sauce and Giblet Gravy. 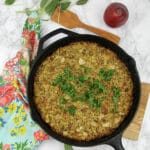 Are you looking for a gluten-free recipe? Try this Sausage and Wild Mushroom Skillet Stuffing from Columbia Gorge.

Update Notes: This post for Skillet Dressing Recipe was originally published November 10, 2016, and on October 14, 2019, was updated with one or more of the following: step-by-step photos, video, updated recipe, new tips.

You'll Love These Other Skillet Recipes: