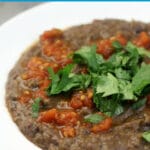 Easy Black Bean Soup made with canned beans and pre-chopped mix of onions, peppers, and celery. Healthy dinner on the table in less than one hour!

Do y'all remember when those round containers of Soup Starter mixes first came out? I imagine it was in the late 70s, early 80s. I used to beg my Mama to make soup from those mixes! Now I can't imagine why I wanted that stuff. Everything we ate was homemade so I think it was the novelty of having something from the store.

I wanted canned biscuits too, instead of homemade biscuits. Go figure. I was kind of weird.

Weird or not though, I do like to use some convenience products, especially produce that's already washed and chopped. I frequently buy those containers of chopped onions, bell peppers, and celery in the produce department, and I love the vegetable noodles.

If you're trying to feed your family quickly, sometimes it makes sense to stock up on a few of those conveniences early in the week—not having to spend 20 minutes chopping vegetables can make a big difference!

And yes, those pre-chopped vegetables cost a little more, but the time saved might be worth it—it definitely is to me!

I use canned beans for this easy black bean soup recipe, but of course you could use regular dried beans and soak them overnight and then cook them for a couple of hours. Totally negates the quick and easy part, but hey, whatever floats your boat.

If you want to stick with easy though, just drain the beans and rinse. Done.

The only thing I chop for this recipe is roasted red pepper. I like the flavor and they are soft and only take seconds to dice. Just use one or two from a jar of roasted red peppers and save the rest for another recipe.

Cook's Tip: Be sure you use the remaining peppers in a few days because they don't keep long once opened.

Stir in the beans, bring to a boil, then simmer for about half an hour.

I like the immersion blender because you don't have to deal with scooping the hot soup in and out of the pot and blender, which has always seemed like a recipe for disaster to me!

What Goes with Black Bean Soup

So what do you serve with this slightly spicy black bean soup? I like to drizzle on a little salsa and sour cream, along with some fresh cilantro. You could add chopped avocado and diced red onion if you want to make a little more work for yourself.

I'm usually making this soup when I need to throw together something fast, so chopping anything extra is off the table for me in that case.

We typically just eat a bowl of this soup and some cornbread and call it good because it's a satisfying meal on its own. However, a simple green salad would fill it out nicely if you feel like you need something more.

And don't forget the fudge pie! You can have it in the oven and ready by the time the soup is done! 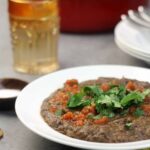 Check out all the soup recipes here!