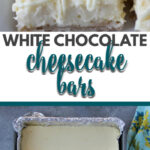 White Chocolate Cheesecake Bars with a hint of lemon and a yummy shortbread crust are easy to make and just right for bridal showers, dinner parties, or simple family suppers.

If you're constantly on the hunt for good, easy recipes that you can add to your repertoire for parties or just to serve on a Wednesday night, this recipe for White Chocolate Cheesecake bars will quickly become a favorite.

You can even turn these easy cheesecake bars into cute little mini cheesecakes if you want to fancy things up a bit!

Sometimes you don't have time to make a classic New York style cheesecake, but you still want the cheesecake flavor, and that's where having a great cheesecake bars recipe comes in handy.

This recipe is much simpler and less time-consuming than my traditional cheesecake, although it does require a few hours chill time.

When I made these White Chocolate Cheesecake Bars, I chilled them overnight in the refrigerator and I definitely think that's best. They were very creamy when I first sliced them to take to a potluck party, but a few hours later they were perfect!

Pro Tip: If making these cheesecake bars again, I would make them in the morning, remove from the pan and cut them into squares the following morning, and serve that evening.

You don't need any special tools for this recipe, just a square pan and a zester for your lemon. This one is my favorite!

The White Chocolate Cheesecake recipe is originally a Kraft recipe, which I tweaked for some additional flavor like a little almond extract, extra white chocolate, and a little heavy cream for a creamier texture.

You may also like...
Chocolate Chip Cheesecake - an easy cheesecake recipe that everyone just loves!

Step 1. You'll need to melt the white chocolate first so it can cool slightly while you're preparing the crust. Then crumble some shortbread cookies—you can do this in a food processor, or like I do by placing them in a large, sealable bag and crushing with a rolling pin.

Step 2. Then add melted butter and a little sugar and mix well to make a crust.

I used a 9x9-inch baking pan, but you could also make these easy cheesecake bars in a muffin tin lined with papers.

Step 3. Press the crust into the pan. You'll need to bake the crust for about 8 minutes to set.

Step 5. Then add lemon zest and juice, and the melted white chocolate, and then the eggs. Mix on low speed until blended and spoon over the cooled crust.

Step 6. Bake the bars about 20 minutes or until center is almost set. Remove from oven and cool completely then allow to chill at least 8 hours.

Pro tip: I waited until the following day to slice these cheesecake bars, which was probably about 18 hours after I had made them. I thought they were a little too loose at that point, but by the time I served them later that evening they were perfect.

To make these cheesecake bars extra special, drizzle some white chocolate over the top and sprinkle with extra cookie crumbs. 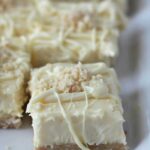 Great flavor ! My foil stuck to my pan for some odd reason but the flavors were delicious. Long set up time.

Can't wait to try this one

Great recipe! I'm linking to this in my weekly email gazette. Thanks to Stacey at Southern Bite for letting me know about you!

Great recipe! I'm linking to this in my weekly email gazette. Thanks to Stacey at Southern Bite for letting me know about you!