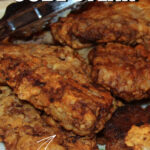 Cube steak is best floured and fried in a skillet. Tender and delicious, cube steak cooks quickly so it's perfect for a weeknight meal. This is Southern comfort food at its best!

But I guess somebody needed to fancy up the name so folks who had never had cubed steak would know what they were eating. And so, today, I bring you country fried steak also known as chicken fried steak—or where I come from, cube steak.

What is cube steak?

Cube steak is cut from the top or bottom round of beef, which is typically a tough cut of meat. It's inexpensive and quite flavorful. To make it tender, the butcher will pound and flatten the meat. It cooks quickly and cuts easily.

How to cook cube steak

You don't need a recipe for cooking fried cube steak or country fried steak. I've listed some amounts below in the printable recipe card, but you really can just wing it, as is the case with most old Southern recipes.

You need flour, buttermilk, egg, salt, and pepper. I also use Worcestershire, Tabasco, and seasoned salt but that's not necessary if you want to keep it simple.

Step 1. Make yourself an assembly line with a baking sheet, two pie plates, a large cast-iron skillet, vegetable oil, and a paper-towel lined plate. I also like to have whatever I'm serving with the steak ready to go so we can eat as soon as the steak is done.

Pro Tip: I like to have my oil heating while I'm dipping the steaks. You can use vegetable oil, canola oil, peanut oil, or even shortening. The oil should be about half an inch in the skillet, just enough to slightly come up the sides of the steak but not to cover it. Heat on medium until it sizzles if you drop in a sprinkle of flour or water.

Step 4. Carefully lay each piece of steak in the hot oil in the skillet. Fry until each side is deep, golden brown, 3-4 minutes per side. Remove steak to a paper-towel lined plate and serve immediately.

Note: An alternate way of cooking cube steak, and the way we had it most of the time when I was growing up, is to skip the milk and egg mixture and just flour the steak and fry it. That's also how we cooked pork chops and pieces of cut round steak that weren't cubed. But my family prefers the extra breading that comes with dipping in the milk and egg so that's how I do it.

You can serve country fried steak with mashed potatoes, green beans, macaroni and cheese, butterbeans, rice, or just about anything. But you must have biscuits. Most folks will also say you must have gravy but I can't help you with that. My gravy is pitiful so I won't even try to include it here. Here's someone else's recipe for chicken fried steak gravy. 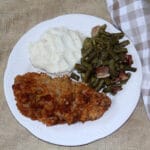 Update Notes: This Cube Steak recipe was originally published May 21, 2014, and on July 13, 2021, was updated with one or more of the following: step-by-step photos, video, updated recipe, new tips.